Story behind the Agro Division's establishment 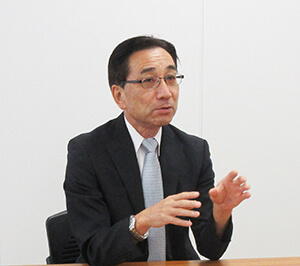 Japanese agriculture is increasingly unstable in terms of potential future profit improvements due to factors such as aging of agricultural workers, lack of successors and spikes in energy and resource prices.

Under such conditions, many growers in the field of greenhouse horticulture are rapidly pursuing transitions to plant factories and other large-scale agricultural operations, high-tech agricultural solutions, and other such approaches that enable year-round, stable production of high-quality crops. Furthermore, numerous large companies are now participating in such endeavors.

IKEUCHI's Agro Division was created to handle everything from R&D for both equipment and system- and support-type measures through to manufacturing and sales with the aim of cultivating new agricultural approaches through the use of fog atomization technologies.

The products Agro Division handles include a fog cultivation system, fog cooling and humidification system, disinfection/pest control system the system that use Semi-Dry Fog®, which is much finer fog than that of conventional spray cooling equipment.

Fine-fog cultivation systems are central to our operations, and in recent years our Semi-Dry Fog® cooling and humidification system has come to the forefront as a popular global warming countermeasure. 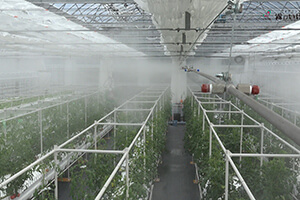 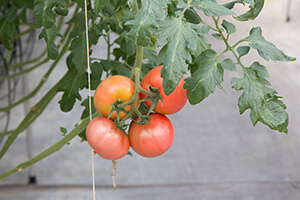 During ultra-hot summers brought about by global warming in which temperatures exceed 35°C, temperatures inside greenhouses rise above 40°C, leading to poor crop growth and raising the risk of heatstroke among employees working inside.

Our CoolBIM® system, which utilizes the evaporative cooling effects of fine fog to cool and humidify greenhouses without wetting crops and greenhouse interiors, can bring these indoor temperatures down to mitigate the burden placed on workers, enable year-round greenhouse growing and offer other such advantages.

We built an agricultural testing facility in Nishiwaki city, Hyogo prefecture (Japan) where we grow and sell tomatoes, lettuce and strawberries throughout the year as part of trials to verify the profitability of this model.

Additionally, we are pursuing joint research in areas such as cultivation technologies and environmental control technologies together with universities, NPO research organizations, corporations involved in the agricultural field and other such organizations. By employing environmental control technologies that incorporate fog spraying, we apply continuous temperature and humidity control, vapor pressure deficit control and other such controls with the aim of achieving stable crop production throughout the year while striving to achieve higher profitability in growing operations.