Humidification to Solve Two Problems at Once

Humidification that solves two problems at once:
reducing both energy costs and cooling load requirements through non-wetting fog evaporative cooling

In recent years, production speeds and quality have become increasingly important in manufacturing processes, and static electricity (static charges) causes problems in both of these areas at quite a number of production plants. In response, management of production site humidity conditions in addition to temperature management has become vital.

Troubles caused by static charge/low humidity in each industry

Humidification to solve two problems at once

Although steam humidification systems have traditionally been used in production facilities to reduce static electricity and prevent related problems, many companies have begun to focus on lowering in-house energy usage following the 3rd Session of the Conference of the Parties to the United Nations Framework Convention on Climate Change (the Kyoto Conference / COP3), the 34th G8 Hokkaido Toyako Summit , the Fukushima Daiichi nuclear plant disaster brought about by the Great East Japan Earthquake, and other such events and incidences. As a result, these companies are rapidly switching from traditional steam humidification to water-spray humidification systems. 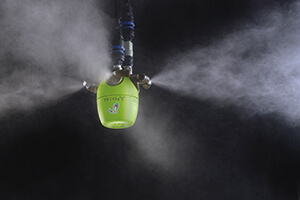 IKEUCHI offers water-spray fog humidification equipment, including humidity control systems that use Dry Fog that doesn't wet the objects or persons with which it comes into contact. This latter system enables energy cost reductions of 80% or more compared with traditional steam humidification systems.

Furthermore, machinery used at production sites generate large amounts of heat, thus requiring the use of air conditioning and cooling equipment. When steam humidification is employed, the humidification system itself becomes an additional source of heat, thus necessitating further (and more wasteful) cooling operations in response.

In contrast, use of the Dry Fog humidification approach results in only very small amounts of heat generation from the humidification system, and evaporation cooling of fog reduces the surrounding temperatures by 2°C to 3°C (3.6°F to 5.4°F). These solves two problems at once by cutting energy costs and reducing cooling load requirements.